We’ve posted two new videos showing the H1 heliostat. See the videos on the video page (click here). First video shows 15 H1 heliostats moving from ‘safe’ position to a target, moving to another target, then back, and so on – demonstrating repeatable positioning and the advantages of wireless remote control. The second new video shows startup / limit-switch finding routines from the front and back of a pair of H1 heliostats, giving a great illustration of the mechanicals of the H1. 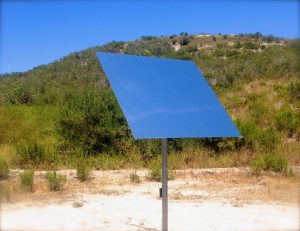 LightManufacturing is pleased to offer the commercial-grade H1 heliostat for sale to the general public and industrial clients.  Applications for the H1 include heating and lighting – the H1 heliostat delivers over 1300 watts of energy to a target in heating applications, and over 150,000 lumens for lighting.

…have traditionally been a hobbyist product on the smaller scale, or proprietary product used in large utility-scale ‘power-tower’ installations.   No commercial off the shelf (COTS) heliostats have been available in the US market, and only limited choices available in Europe.   LightManufacturing’s H1 heliostat solves this availability problem, providing an easy to setup, easy to use, powerful commercial grade heliostat with advanced features. Unlike glass-mirror heliostats which are expensive to transport due to their delicate reflector, LightManufacturing’s H1 uses a tensioned-membrane mirror that is shatterproof and tough, and provides better reflective properties.  Available wireless  systems let a user target one, or many H1 heliostats from a nearby computer, without connecting USB cables to each heliostat for configuration. Production of the H1 heliostat is US based, ensuring quick production and delivery times to the North American market.    LightManufacturing developed the H1 for solar thermal applications like Solar Rotational Molding (SRM™), but recognized the public’s need for a high-performance general-purpose heliostat and released the heliostat for purchase in non SRM uses.
H1 heliostat ( https://www.lightmanufacturingsystems.com/heliostats ) mentioned in Buildings.com Greener Facilities issue, along with LEED and other topics: http://www.buildings.com/News/IndustryNews/NewsletterDetails/tabid/3399/ArticleID/14848/Default.aspx
LightManufacturing’s Karl von Kries will present the firm’s Solar Rotational Molding systems to the Association of Rotational Molders at the ARM national conference in Minneapolis on Monday, November 12, 2012. More information is available at https://www.armmeetings.org/ From the schedule: “Solar Rotational Molding Systems Karl von Kries, Light Manufacturing Learn about LightManufacturing’s Solar Rotational Molding systems, which reduce molding costs by eliminating the need for natural gas or other hydrocarbon fuel. Karl von Kries will walk you through the process, show exclusive photos and video, and answer your questions about this sustainable and low-cost molding technology. Karl von Kries is the CEO of LightManufacturing and Technomad, and was formerly the head of New Product Development at Hardigg Industries in Massachusetts.  “
From http://www.azobuild.com/news.asp?newsID=15784 , “LightManufacturing announced that it has commenced shipping its H1 heliostats for LEED building applications. The first shipment was for an architectural lighting project in Michigan…”
From the article:  “…LightManufacturing today announced its H1 heliostat, which delivers more than 2000 watts of heat and light energy to a target…” Read the article:  http://www.solarnovus.com/index.php?option=com_content&view=article&id=5539:lightmanufacturing-develops-industrial-heliostats&catid=54:new-products&Itemid=427

Mirror, Mirror, Make Me a Kayakâ€¦out of Sunlight

“A California company called LightManufacturing has figured out a way to fire up a plastic molding process with a concentrated solar power system…” Read the article @ http://cleantechnica.com/2012/07/31/lightmanufacturing-system-uses-concentrated-solar-power-for-plastic-molding-process/
See new article in Plastics News: http://www.plasticsnews.com/headlines2.html?id=25405 From the article:  â€œWe use solar energy in its raw state and capture it,â€ Von Kries explained. The technology circumvents traditional solar strategies of converting the sunâ€™s rays to electricity, which then must be transmitted some distance for use. And unlike conventional sun-to-electricity programs LightManufacturingâ€™s approach does not rely on subsidies.
New approach avoids pitfalls that plague solar electric PISMO BEACH, Calif., May 7, 2012 — When most people hear the words “solar energy,” they think of expensive power towers or under-performing photovoltaic panels. California-based LightManufacturing LLC offers manufacturers a new way to use solar energy to mold plastic products sustainably and cheaply. http://www.lightmanufacturingllc.com Each year manufacturers “rotomold” more than 3.6 billion pounds of plastic into large consumer and industrial products such as water tanks, road barriers, boats, and toys. Traditional rotomolding requires massive, expensive machinery, and large natural gas heated ovens. The process emits more than two billion pounds of greenhouse pollution annually. Energy to fire the ovens contributes up to 30% of the total cost to make rotomolded products. In contrast, LightManufacturing’s solar rotomolding (SRMâ„¢) systems use the sun’s heat to make the same products at significantly reduced costs — and with zero carbon emissions. In the patent-pending new approach, specially designed heliostats (sun-tracking mirrors) aim sunlight at low-cost molding armatures. Small SRM factories can be placed close to customers, creating additional savings by reducing transport costs. SRM systems operate entirely “off-grid,” requiring no outside electricity or fuel. LightManufacturing CEO Karl von Kries came up with the idea for solar thermal rotational molding while working with a traditional rotomolding factory in New England. “I was out in the plant with these machines,” von Kries said, “and it struck me as an inherently wasteful process. I thought, ‘Why couldn’t we do this with solar heat?'” After years of research and development, von Kries founded the company in 2009 to make solar thermal rotational molding a reality. Today, LightManufacturing has a working test facility in California that makes plastic parts for customers. The company also developed a new type of low-cost heliostat, which replaces expensive glass mirrors with thin reflective plastic stretched flat like the head of a drum. The firm anticipates shipping ready-to-use solar rotational molding systems and heliostats to customers by August 2012. “I can’t think of another process like it. When’s the last time you heard of a solar solution that’s cheap to buy and operate, solves environmental problems, doesn’t depend on subsidies, and makes the market more competitive?” von Kries said. For those worried plastic products can’t be “green,” LightManufacturing notes that its systems mold recycled plastic and sustainable bio-plastics just as well as oil-based plastics. The firm sees rotational molding as just the beginning. LightManufacturing plans to bring solar thermal-powered technology to other industrial manufacturing processes, such as injection molding, blow molding, agricultural applications, and more. “We’re in the very early days of applying solar thermal energy to industry — and the potential is huge,” von Kries said. For more information about LightManufacturing and solar thermal rotational molding, visit http://www.lightmanufacturingllc.com/video/. Photo 1: Solar molding in action https://www.lightmanufacturingsystems.com/wp-content/gallery/hq-images/target_molding-copy.jpg Photo 2: LightManufacturing heliostats in grassy field https://www.lightmanufacturingsystems.com/wp-content/gallery/hq-images/grass_and_heliostat_array.jpg Media Contact: Amy Blasco (805) 242-6503 [email protected]   # # #